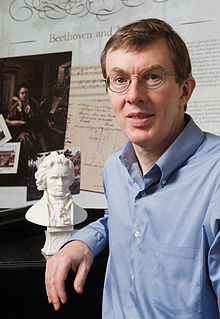 “Celebrated and long familiar is the sounding symbol for Bach – the four tones B flat, A, C, B natural – which in German musical terminology spell out the four letters of the composer’s name. Unfamiliar is the corresponding symbol for Beethoven. From the five sounding letters B-E-E-H-E–whereby B is expressed as B flat and H as B natural – we hear at once a pregnant motive that conveys the mysterious quality of the piece. The notation of this motive, with the inclusion of apparently superfluous natural signs before the notes on E, convey an obsessive atmosphere. Where are we led by this musical idea? An ominous, descending countermelody is soon combined with the Beethoven motive before we hear a fleeting lyrical passage, a utopian glimpse before the fateful idée fixe resumes. Thereafter the falling countermelody returns and breaks through with tragic force: springing from rapid scale passages, glissandi sweep across the entire keyboard, while the main motive thunders in chords in the deepest register of the bass. Yet at the conclusion the original motive returns. What lurks behind this deceptively simple utterance, which stands as an emblem for the composer?” 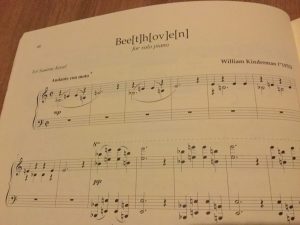 William Kinderman has been described by Alfred Brendel as a “very rare bird” on account of his ability to combine scholarship and performance. Recently he has extended his activities into musical composition. Kinderman’s books include Beethoven’s Diabelli Variations, Artaria 195: Beethoven’s Sketchbook for the Missa solemnis and the Piano Sonata in E Major, Opus 109 (3 vols.), Mozart’s Piano Music, Beethoven (2009), The Creative Process in Music from Mozart to Kurtág (2012), and Wagner’s Parsifal (2013). He is a distinguished pianist and has recorded Beethoven’s later piano works; his double CD of the Diabelli Variations is available through Arietta Records. His research has probed the creative process of important composers from the eighteenth century to the present; his Beethoven research and performance even served as trigger for the Broadway play “33 Variations” by Moises Kaufman. In 2010 Kinderman received a Research Prize for lifetime achievement from the Humboldt Foundation. He is Professor at the University of Illinois and has taught as Guest Professor at the University of the Arts in Berlin and at the University of Munich. During 2016-17 Kinderman will be a Director’s Fellow at the International Research Center for the Humanities in Vienna as well as Visiting Research Professor at the University of Art and Music in Vienna.