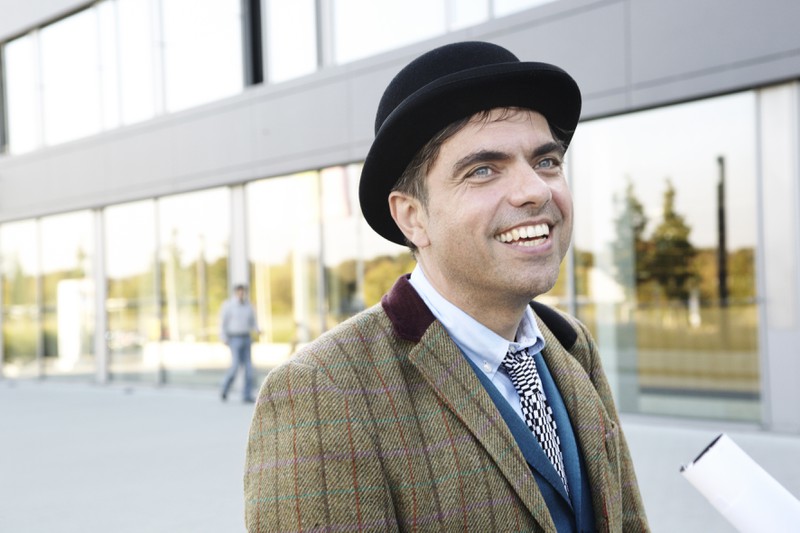 “Hämmerklavier is a continuous cycle for solo piano that I started in 1994 and which has since grown to 22 pieces, filling 3 complete solo recitals if all were played in succession. The title does not refer to the “Hammerklavier” type of fortepiano or even to the “Hammerklavier-Sonata” by Beethoven (though of course the latter would not be an entirely unwanted homage), but rather to a peculiar attitude of the interpreter towards the performance. The piano is not just an instrument here – it is a counterpart; the pianist does not simply press the keys, he is also a “performer” in the larger sense. The pieces all demand a high degree of virtuosity and intensity. It is practically impossible for the performer to approach the pieces in a neutral fashion. “Abweichung (hommage á Beethoven)” is like an aesthetic homage to Beethoven. If anything runs like a thread through most of Beethoven’s works, then that’s the freedom of individualism, which is most vulnerable in our time. The deviations of this particular piece are almost not noticeable but they rebel against a strict order.” 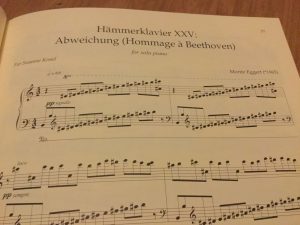 Moritz Eggert, is considered one of the most versatile and adventurous voices of contemporary music. Born in Heidelberg and growing up in Heidelberg, Mannheim and Frankfurt am Main he was already playing keyboard in various Rock and Jazz Ensembles during school, followed by academic studies as a classical pianist and composer. These studies continued in London and Munich (where he resides today with his wife, the writer Andrea Heuser, and his two children). From the beginning he worked in all musical genres as a composer – his list of works already encompasses more than 230 works, not only 11 evening-long operas but also several ballets and works for dance and music theatre, orchestral music, chamber and ensemble music, vocal and choir music (with a strong focus on “Lied”), church music, experimental and electronic music, instrumental concertos, music for children and youths, music for film and radio as well as radio plays and open air spectacles. He is a renowned and experienced pianist and has played countless premieres of his own and other works in Germany and abroad. In the last years he is also increasingly appearing as a conductor, actor and singer, performing in operas and theatre. Together with Sandeep Bhagwati he founded – still a student – the “ADEvantgarde Festival” for young composers in Munich, a festival that is still going strong today. Next to his many articles for national and international print and online media he is also writing regularly (often scathingly ironic and thought-provoking) for his own “Bad Blog of Musick”, which is considered the most influential blog for contemporary music in Germany. He is considered an instigator of change in New Music and has often criticized its ivory tower attitude. This also makes him a passionate defender of the young generation, which he also tutors as a professor of composition at the University of Music and Theatre in Munich (since 2010). Moritz Eggert’s music is performed worldwide, with pieces like his piano solo cycle Hämmerklavier already part of the repertoire of countless young pianists. The theatrical premiere of Freax is planned for Regensburg in 2016. In October of 2014 his piece I accept the terms and conditions (an attempt to set the hidden pitfalls of the terms and conditions of Google to music) was premiered for the 100 year anniversary of the Goethe Universitaet in Frankfurt, with the German President Gauck present. In December of 2014 he performed with 2Raumwohnung, with their mutual project My Dream is longer than the Night in Bochum, which combines Mahler’s 5th symphony with new songs. Website Moritz Eggert