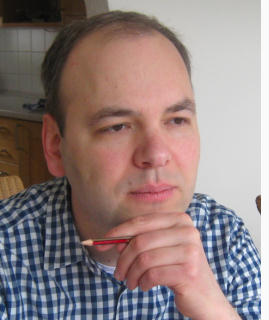 “The temporal dimensions of form unites in the Viennese classic compositional language correspond to those of the word language: motifs are about as long as words and topics are as long as spoken sentences. The music is extremely clear and hierarchically organized – in phrase, paragraphs, formal sections, etc. It is a music of ‘human’ scale: you can find your orientation at any time in the musical form. Beethoven, a unique genius, contains in his music repeatedly places where the human dimension of the activities will be overridden. One example is the syncopated chords in the first movement of the sonata op. 101, where the metric orientation is lost and this darkens the tonal horizon for some time. In my brief paraphrase I have focused and extended this part into a gigantic prelude and conclusion of one of Beethoven’s chords. My wish with this piece was to absolutize the enormousness which only shines out in Beethoven’s work – a poetic license if you will, which accounts for many of my pieces and requires a much longer time period. This is why the specification to compose a ‘short piece’ was especially sensitive, but also excitingly challenging.” 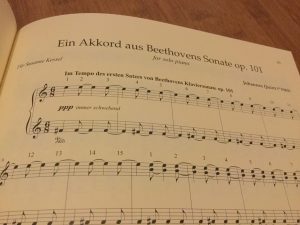 Johannes Quint studied composition and music theory with Hans Zender and Friedrich Jaeker in Frankfurt/Main and Cologne, Germany. In 2013, after an extended period of writing chamber music for traditional instruments, Johannes Quint began experimenting with computer-aided composition. These experiments focus on new interactions between sound and interpretation. He is a professor for music theory, composition and computer music at the Hochschule für Musik Köln, Standort Aachen and at the Hochschule für Musik und Darstellende Kunst Frankfurt/Main.  Website Johannes Quint