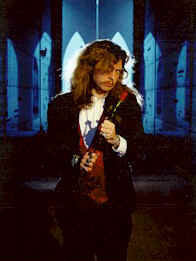 “ I worked on the plethora of sketches of this piece (despite it’s short length!) for a VERY long time before I actually conglomerated them into the form and sound I wanted. The title comes from the fact that I do not just compose at my piano and/or in a room. I write EVERYWHERE: bars, casinos, stoplights, subways, buses, planes, etc.

Deep and profound thanks to Maestra Kessel for including me in this project!!!“

„The Vampire, Even in Las Vegas and Manhattan, Still Dreamed of Heiligenstadt“ – Aufführungen:

His opus numbers have just passed the 650  mark and his accolades include: an Austin Critics‘ Table Award (for his String Quartet #2 commissioned by The Miro Quartet) , three nominations as possible finalist for  the Pulitzer Prize, four nominations as State of Texas Musician of The Year, and four as a semifinalist for The American Prize. Quotes about his music and output include: “ ..with all of these luxurious harmonies and melodies, (Waddle) may be the American Rachmaninoff “ and  from the current season :” (Waddle’s) new neo-baroque Violin Concerto is an absolute masterpiece.”, and “ … few people alive are contributing to the lifeblood of their instrument with so much glorious material as (Waddle) is.”

As a soloist, citations include: (from his first ISB appearance as a featured recitalist) –“ (Waddle) is obviously now one of the most creatively thrilling solo bassists in the world!“ As an ensemble musician, he has held both titled and section positions in more than a dozen professional and festival orchestras  including his current position with the Austin Symphony that he has held since 1992. His busy guest conducting schedule has taken him to venues such as Lincoln Center and Carnegie Hall and he also served as director of The Austin Philharmonic for 2 1/2 seasons. He also serves as Permanent Legacy Composer of Orchestra Enigmatic of Louisville, Kentucky where he also retains the position of Co-Principal Guest Conductor.

„Beethoven is gravity. He is the center of the universe. ALL of western music since 1827 eventually pulls back to him and his achievement.„