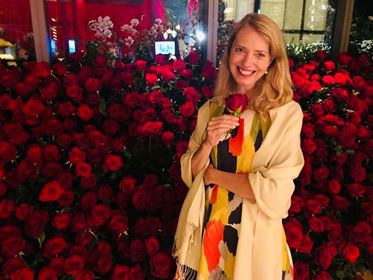 Mist Thorkelsdóttir (IS) – A wink at Beethoven

„The slight Wink at Beethoven is a very personal glance back to my childhood where Beethoven an integral part of my daily life. I grew up listening actively, seated in front of the record player as well as passively falling asleep to my father’s piano playing – more often than not the house was filled with Beethoven.

The Allegretto from the 7th Symphony was the most personal of all. Listening at my father’s side while he softly murmured “Mist Thorkelsdottir” to the steadfast rhythm…….“

„A wink at Beethoven“ – Aufführungen:

I experience. As a composer those experiences get woven into a tapestry of musical sound which becomes a reflection of my life ́s experiences; my soul.
After completing studies in the USA Mist embraced Icelandic musical life, teaching and being active in various artistic organizations as well as composing. She has received commissions and grants from performers and organizations in America and Europe. Mist has a roster of over 70 works performed, ranging from solo, chamber music, choral to full orchestra works. Some have grown wings and appear regularly on programs.
For several years Mist has been an active spokesperson for Icelandic music, being on the board of the Icelandic Composer Society for 15 years and holding chair positions on several artistic committees in Iceland and in the Nordic Countries.
Since 2001 Mist has embraced the world of Higher Music Education, founding the Music Department of the Iceland Academy of the Arts in 2001 and was Dean of Music until 2014. From 2014 – 2016 she was the Head of the Academy of Music and Drama of the University of Gothenburg. She was active on the board of the Association of Nordic Music Academies 2002 – 2016 and was a council member of the European Association of Music Conservatories (AEC) between 2006-2012. She was a founding- and board member of MusiQuE, European Quality Enhancement and Accreditation Agency for higher music education through 2016 and is active in conducting quality and accreditation reviews in Europe and Asia.
Since July 2016, Mist has been with the University of Southern California, Office of Strategic and Global Initiatives. There she international relations for the performing arts as part of the Office of Strategic and Global Initiatives.